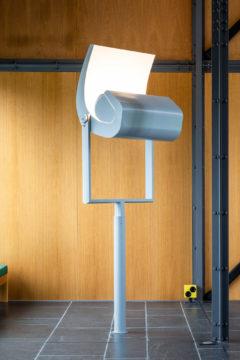 A larger-than-life-size lamp sculpture dominates the studio space. Its multi-curved sheet-metal shade is mounted on a stand made of sectional steel and can be tilted and rotated in several directions. The fluorescent tubes inside cast light upward onto the ceiling to complement the spotlights, which are primarily directed at the exhibits. Le Corbusier developed this lighting fixture, known as the LC I, in 1951–52 in collaboration with the mathematician and composer Iannis Xenakis (1922–2001) for the public zones of the Unité d’habitation in Marseilles.
In addition to spotlights mounted on tracks and numerous recessed lights, a further model from Le Corbusier’s lighting range can be found here: the wall-mounted LC III reflector lamp, likewise designed for indirect ambient lighting. Both the LC I and the LC III lamps are exact replicas. The originals were removed in 2016 and are in the possession of Heidi Weber.