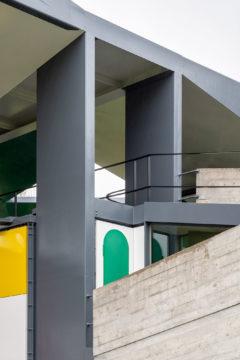 The first project draft for the Zurich pavilion envisioned a massive concrete structure. Raw exposed concrete surfaces alternated with open façade sections that were to be glazed and fitted with rhythmically distributed vertical concrete slats.
By the spring of 1962, Le Corbusier had already decided to revise his design and began—in parallel to the official project—to work on a steel variant. He based his design on a system for prefabrication for which he had applied for a patent in 1950, referred to as “Le Brevet,” the French word for patent. “The principle of this patent,” wrote Le Corbusier, “is that a single corner-piece is used throughout the construction.” The iron angles are 226 centimeters long, corresponding to the basic value of his Modulor system. Fixed in place using an auxiliary construction, the angles are welded together to form cubic modules. Le Corbusier believed that assembling several such modules provided an efficient and cost-effective way to construct residences. More than 20,000 bolts were needed in the Zurich pavilion.