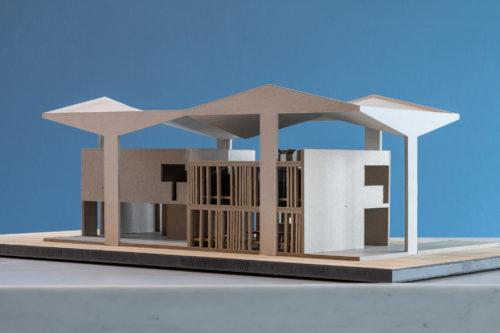 The outstanding feature in the concept for the exhibition pavilion is the spectacular formulation of an immense roof. The roof structure is made up of two connected steel umbrellas of complex shape, one concave, the other convex. The umbrellas were transported to the construction site as large components, assembled, raised with a mobile crane, and then mounted on the prepared supports.
Le Corbusier had already used related designs for earlier exhibition projects. In his Porte Maillot project of 1950, an almost identical double umbrella tops exhibition rooms that were made to be easily dismantled. Designed for the synthesis of painting, sculpture, and architecture, the building was never executed. In Zurich, the “parasol” forms a protective roof for a permanent exhibition building divided into different areas. An open roof terrace lies between its two clearly separate wings.