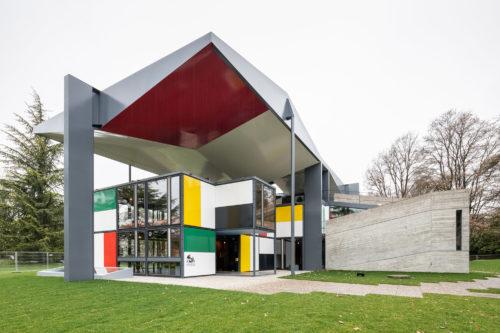 The Pavillon Le Corbusier is the only building in the neighborhood positioned obliquely to the street. Le Corbusier’s design frees it from the rigid building lines so that it can stand as autonomously as possible as a solitary structure in the landscape.
There was, however, another reason for this particular orientation. Early in his career, Le Corbusier had already taken to heart the insights of the historian Auguste Choisy, who wrote that the builders of antiquity had specifically chosen the site of the Parthenon in Athens for the oblique view it afforded, which enhanced the structure’s picturesque appeal. Although a frontal view is more majestic, Choisy found it to be an exception that must be justified. Le Corbusier had also sought the more intriguing oblique view in his Carpenter Center for the Visual Arts in Cambridge, Massachusetts, which is set diagonally between the buildings lining Quincy and Prescott Streets.

William Curtis and Eduard F. Sekler, Le Corbusier at Work: The Genesis of the Carpenter Center for the Visual Arts, Cambridge, MA, 1978.