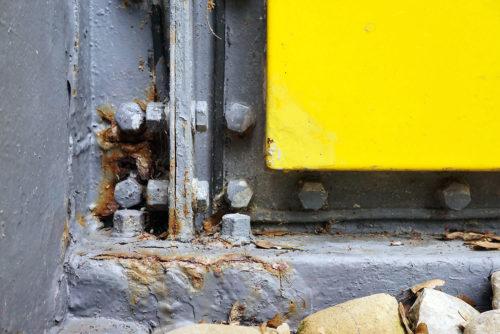 After the expiry of the building rights agreement, the pavilion reverted to the City of Zurich in 2014. A feasibility study conducted by Silvio Schmed and Arthur Rüegg in 2015 identified three major problem areas. First, the building envelope was no longer leakproof, affecting both the concrete of the basement and the ramp, as well as the neoprene seals in the glass façade. Rust was eating holes in the sheet metal. The paint coatings of the steel umbrellas contained toxins 250 times higher than the permitted level. Second, the infrastructure was defective. As a result of corrosion, the underfloor heating had not functioned since 1982, and the climate in the basement ruled out exhibiting any originals. The electrical system was also in a desolate state of repair. Third, the pavilion no longer complied with standard architectural practice. Since the 1965 building permit was still valid, however, the elaborate restoration could focus on the first two problem areas. Replicas were made of the wooden furniture and the tree tables, and the marble table was replaced by a Cassina model. The pavilion reopened in 2019.

Corrosion damage at the base of the building before the 2018 restoration, Pavillon Le Corbusier
Image creditso