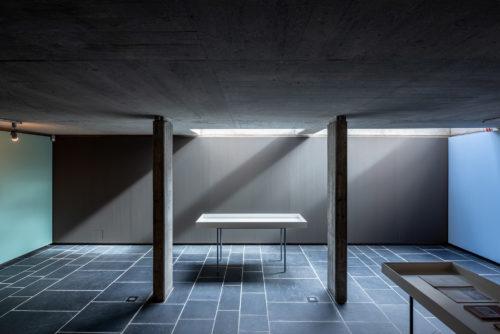 The Zurich architect Willy Boesiger (1904–1990), editor of the complete works of Le Corbusier and curator of the major exhibition on his work at the Kunsthaus Zürich in 1957, was the one who introduced Heidi Weber to the architect. Boesiger was the local architect for the pavilion from 1961 to early 1966, and Le Corbusier largely entrusted him with planning its secondary spaces. The building application drafted in Paris in December 1961 did not yet contain a basement level. Boesiger’s initial plans from 1962 show only an air-raid shelter and a boiler room underground. Later, storage rooms and restrooms were added, as well as a large exhibition space. Boesiger built the lower level in concrete while Le Corbusier was still alive. The interiors were then finished in spray-on plaster and with oak furniture by Boesiger’s successors Alain Tavès and Robert Rebutato, who also gave the two skylights their definitive shape.